Knives are essential tools in the kitchen, and they come in many different varieties and shapes. It’s tough to choose one knife over the other, but believe it or not, different knives are for entirely different purposes. You may be able to do multiple tasks with one knife, but if you want greater accuracy and precision, you need to choose the knife wisely.

Now that we have pleasantries out of the way, let’s dive right into it and find out which blade is best for you: breaking knife vs. straight knife.

What is a Straight Knife?

As the name suggests, a straight knife has an entirely straight cutting edge or an edge that’s straight but slightly curved towards the tip. Any blade with serrations or indentations is not considered a straight blade.

A straight blade typically has a tapering end—the blade gradually reduces in thickness towards the tip from both upside and downside.

A straight knife has a thick but very sharp blade. The sharpness of the straight edge gives it more precision for cutting. Their abilities shine during any work where applying steady and robust pressure is required. They have a significant advantage over any serrated knives in that they give very smooth cuts, unlike the former, which usually tear through the food.

When should you use a Straight Knife?

Another type of straight-edged blade is known as the hollow edge knife. It has evenly spaced vertical indentations or sunken pits or “hollows” along the edge of the knife. The pits are ground out of the thickness of the blade, making sure that the blade remains straight.

These trap air, and when you cut up food, the air pockets help to get the food off by not allowing a vacuum to be created, hence allowing ease in cutting and more flow of juices as you cut veggies and fruits.

What is a Breaking Knife?

A breaking knife is entirely different from a straight knife. It’s a form of butcher knife with a thinner, sharper blade and a pointed, upwardly curved tip.

Unlike the straight blade, a breaking knife’s tip curves backward towards its spine, giving it more flexibility and handling compared to a standard butcher’s knife.

Their primary purpose is cutting and chopping up large pieces into smaller pieces. It helps break them down for barbecuing or even for cooking.

The size of the blade is pretty long, which helps it easily break down large pieces of meat and even deal with small bones, cartilage, and even hard skin. Fat trimming is also far more straightforward compared to other similar knives.

When should you use a Breaking knife?

Breaking knives have a lot of advantages; they help get through very thick meats to cut them into smaller pieces. People even use them for barbecuing parties as they can cut through anything.

Take care of the blade and make sure it’s sharp before using it to cut anything. Well-maintained blades can last for years without breaking and continue to cut through whatever you want. In addition to the typical curved blade, the stamped knife is also far more lightweight and handy for raw meats.

The curved knife helps in smooth cuts for different types of meats. Meat and even bones perish when faced with it. The stamped knife has much more control than the curved blade; it’s advantageous when you have small meats or fish to cut and need more precision and accuracy.

While both knives are similar-looking, each has an edge with no jagged teeth, but they are used for different purposes.

They are essentially used for different purposes, and hence it would be unfair to compare them. If you want an everyday household knife that you can use to cut vegetables, fruits, and even small meats, then the straight knife is the knife for you.

If you want to cut up large pieces of meat, then the breaking knife is for you as it’s tough enough to handle whatever you throw at it and come out the victor. 5 Things You Must Know About Costco Angus Burgers Is Tikka Masala Spicy? How Much? 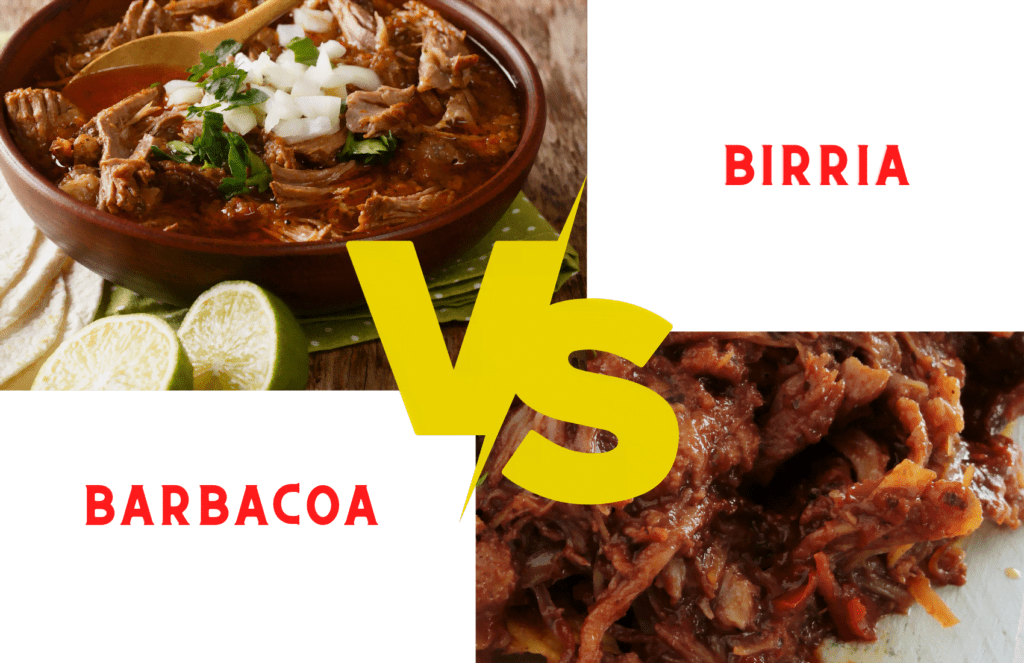 Birria Vs Barbacoa: What’s The Difference, In fact?